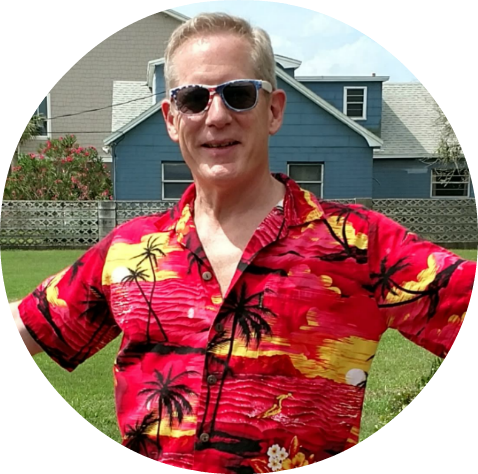 I know some people put their awards and accolades here or tell you how they built their company.

That’s a story for another day.

I’d like you to know something about me as a person.

So first, I’ll get my core journey out of the way quickly, so I don’t bore you.

I was born out of wedlock from a one time, good time.

I grew up with my Grandfather, Grandmother, Mother and Uncle.

My Grandfather died suddenly when I was 12.

My Mother became totally disabled from Parkinson’s Disease by the time I was 18.

My Grandmother was the kindest, most loving person I’ve ever known.

But all except one of the people who raised me were gone by my mid 30’s.

And he could have won the award for “Most Unlikely To Survive.”

He was my Uncle Bill.

But no matter what, he just kept moving forward.

Why most unlikely to survive?

Well, he was a calamity guy, on a first name basis with the local Emergency Room staff.

In addition to car accidents, falling off a roof onto an iron railing, accidentally lighting himself on fire (now that was an interesting 2:00 AM call…) and other “curious” incidents,

he also became an Alcoholic.

And then decided to kick it.

And then decided to kick it.

No Paul. I’m not giving this one up.

The only vice he told me he wasn’t giving up, was smoking.

He knew it was bad for him.

It ultimately gave him cancer in several places and damaged his circulation to the point where he needed both legs amputated from Gangrene.

And through all that, he was the most resilient person I’ve ever known.

He still thrived as the funny, intelligent, caring guy he always was.

So what actually killed him?

And as he lay in intensive care, lapsed into unconsciousness,

his brain swelling and being damaged too fast to save him,

and me being the one he trusted to affirm his DNR,

I had to tell Uncle Bill we couldn’t fix this one.

So did I have a good life growing up, or a bad one?

The way I saw it, there were some hard times happening to the people I loved.

And I worked to help them through it.

I knew it wasn’t about me. And it definitely wasn’t my fault.

Not that it didn’t suck sometimes.

But in fact, I was healthy, intelligent, I had the love of a smart, beautiful woman I dated from the age  of 12 (yeah, I know it’s weird) until we were 25 and then wanted different things in life. We broke up in a loving way and moved on to separate lives. Really great new lives with new people.

Growing up, I also connected myself to a few really great friends, and they’re still the best friends one could ever hope for to this day.

One I met when I was in preschool, and four others I met at about 13. And another two I met when we were between 25-30.

Long haul friends. The ones who know you and call you out when you get lost in the chaos.

And there isn’t a day I’m not thankful and appreciative of who they are and the value they keep adding to my life by just being who they are.

Along my journey I met my father for the first time when I was 28, and found out I also had two sisters and two brothers.

As it turned out, I’d already met one of my sisters several months before when she and her boyfriend at the time came into the store I managed.

After my father told her she had another brother and told her where I worked (and because she lived about 20 minutes from my house), she asked her boyfriend if he still had their salesperson’s business card.

So, at 29 at our wedding, when I was lucky enough to marry another smart, beautiful woman, it was the first time I’d ever seen my father and mother together or they had seen each other, since shortly after I was born.

And almost all of my new sisters and brothers, and my father’s wife, were there to be a part of the celebration. How cool is that!

I was able to spend twenty years having a great relationship with my father and his wife, before they both passed away within a year of each other.

And I still keep in touch with my sisters and brothers, some regularly, (I’m even a Godfather to my sister’s first child!) and love that we’re able to know each other as family and friends.

My wife, Gabriele is one of 9 and I became one of 5, so I’ve come a long way from growing up as an only child.

And Gabriele’s Mom is like a “second” Mom to me.

Gabriele’s sisters and brothers are some of the most colorful, wonderful people I know.

I’d say for me, life is actually pretty amazing. And everyday I feel true appreciation for everyone of the cast of characters that continue to make up my life in so many colorful and fascinating ways.

And there’s the Mile High version of where my early journey took me.

It’s Not About What Life Has “Done” To You

Some say I didn’t start out in ideal circumstances. Ok.

But I always knew I was responsible for my life being good. I just knew that, even underneath the messed up stuff that went on.

It also drove me to get clear about who I was, what I really cared about and to understand as best I could, what tools I’d been given to work with.

A Training Ground For Being More

I know, it sounds pretty “woo woo,” but I saw my life as a kind of training ground for learning to be more.

And if that was true, I must have been left clues about what I was supposed to be doing with my life while on that journey.

So where were the clues and  how do I see them?

How do I figure out what I’m supposed to be pointing my life towards?

I thought there must be a way to put together something like my own “Owner’s Manual” to help me.

Then I could use that “guide” to keep me heading in the right direction, towards where I’d have the greatest chance for a happy, successful life.

I began learning and experiencing a variety of books, trainings and technologies that looked like they could work, centered around “personal development.”

I trained with “woo woo” gurus and learned from scientists, earned two Master’s Degrees and read though what now must be several thousand books.

I wanted to figure out how to put the pieces together, so I could guide myself towards becoming the best of who I was created to be.

I wanted to be clear about my own value to me, and know where I’d feel most connected to what I do and add the greatest value to the world around me.

And it continues to work for me.

I created a way to get clear about my own value and the experience of life I want, so I make better choices.

When I’d described how it worked for me, some asked how they might do the same for themselves.

So I refined my process, tested it with others, both one-on-one and in small group seminars.

I eventually made it the foundation of what has now become The Power Of Intentional Living Membership.

We each have our own complicated journey.

But from the moment we notice the facts that show up, we get to decide how to experience them.

We get to choose how we interpret those facts and decide how we will will allow them to affect our experience of life going forward.

And that makes all the difference between living a life we love and living a heavy life, that keeps on crushing us.

I had my Uncle Bill to show me that I always get to choose how life goes, especially when the circumstances are tough.

If you choose to, you can also create a path that let’s you connect what you do, with the experience of life you’ve chosen.

A Life That Lights You Up Inside!

And to keep moving towards it.

And as you do, you become more and more appreciative of the genuine value of who you are, not only to yourself, but to others.

You learn to love yourself.

Please stop waiting at the curb for your life to come along.

Start Building Your Own Owner’s Manual.

Align what you do with Your North Star, and

Start Living A Life That Lights You Up everyday!

You really can do this.

But you have to choose.. to Live it.